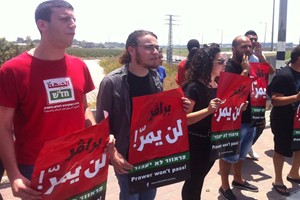 Following the first ‘Day of Rage’ against the planned uprooting of tens of thousands of Palestinian Bedouin in the Naqab (Negev) on July 15, Arab-Palestinians and progressive activists in Israel have called a second ‘Day of Rage’ for next Thursday, August 1. The ‘Day of Rage’ will take place at the Wadi A’ra junction in the north (17:00) and the Lehavim Junction in the Negev (16:00).

On July 15, thousands held numerous demonstrations against the Prawer Bill being advanced by the Israeli government. Protesters – including Arab Members of the Knesset, communists and Hadash activists, marched, blocked roads, and were violently dispersed by security services – including several arrests. The Prawer Plan, which passed its first reading in the Knesset in June 2013  aims to confiscate 800,000 dunnams of land in the Naqab desert, expel over 50,000 Arab-Bedouins, demolish 35 unrecognized villages and confine 30% of Arab-Bedouins in the Naqab to 1% of the land.